Given the prevailing sentiment in Silicon Valley, maybe the answer could be “why not?” But not for us.

When I first announced to our team that we were going to take over the BART with a Chartio ad campaign I was met with a healthy level of skepticism. As a startup, operating in a cashflow positive model, a move like this was quite out of the ordinary. On digging into the concerns, we found a lot of misconceptions about how much something like this could cost, how considered the decision was and what its impact could be. We realized there isn’t really much information out there on campaigns like this and thought we’d contribute our findings. 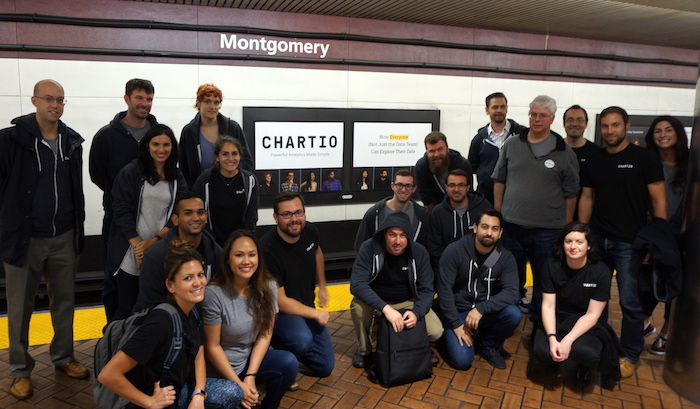 The Chartio team in front of our San Francisco BART advertisement.

In early 2017, I started talking with my CEO about the idea of a metro advertisement campaign. At that point, both of us were feeling excited and cautious.

After the initial discussions, we decided to move forward opportunistically, and at the end we came out with what we considered to be a powerful ad campaign. Here’s what we learned along the way.

Before starting to run with the project, I spent some time with my team discussing what we wanted to get out of this campaign. We boiled it down to four key driving objectives.

Everything we did after that was guided towards and checked against these objectives.

What we quickly found out is that there are a lot of options. A lot. Both media agencies we contacted (Intersection and Outfront Media) were very willing to discuss and customize something that would make sense for our objectives and budget. Given what we were trying to do, we quickly narrowed down the list to four channel options:

1. BART or Muni station takeover
The most expensive option but the one yielding the most impressions. For central Muni stations in San Francisco, like Montgomery or Embarcadero, you can estimate 10-20M impressions with a reach of almost half a million riders monthly. Also, given that there are multiple panels in a station, you can have a number of different creatives telling more of a story. 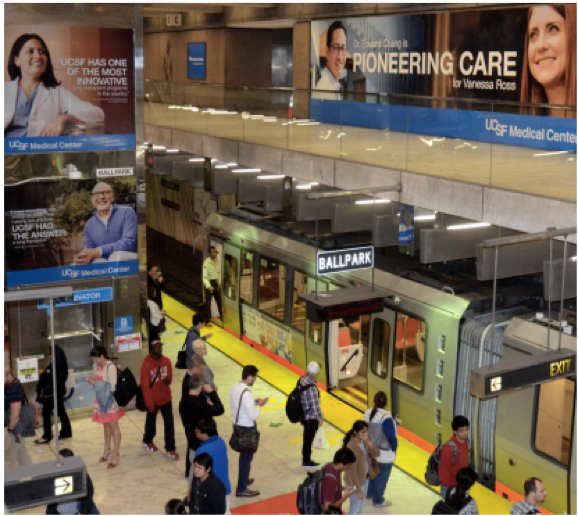 2. Muni vehicle wrap
This is a fairly cost-effective option, however there are no good impression estimates since you can not choose the line where the vehicle will operate in. This was a concern for us given that we were trying to reach a fairly targeted commuter audience. 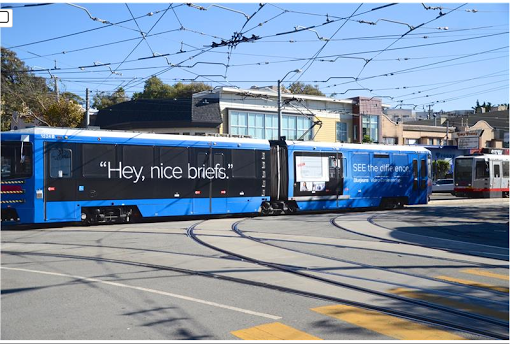 3. Billboard advertising on highway 101/80
This is a very popular option in the bay area. It estimates about 3M impressions per month (if it’s at a good spot) and costs between $10K and $50K per month. But it is a single panel so can carry only one creative. Also, normally a highway billboard commands quick attention, but given traffic levels in San Francisco, you may have more time than you potentially like to spend staring at billboards. 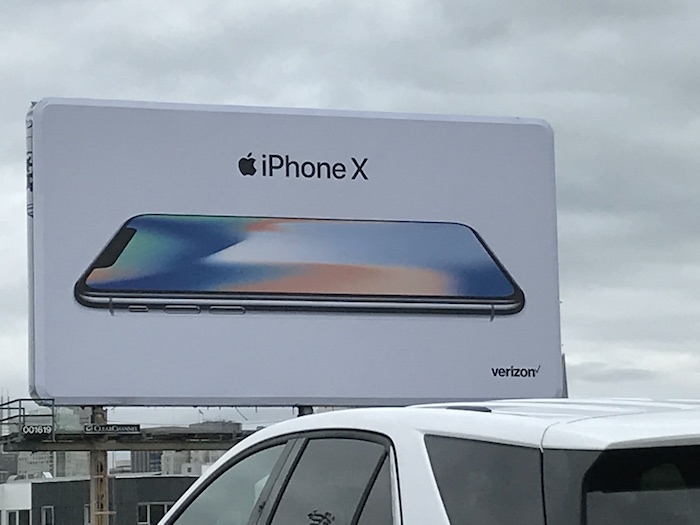 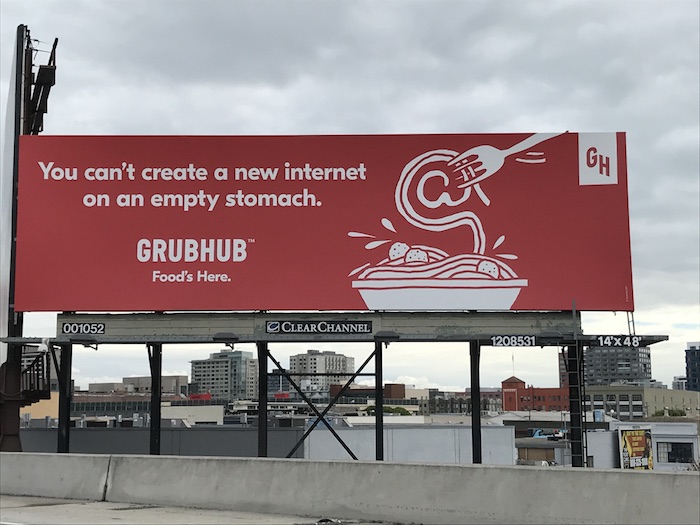 4. Integrated digital campaign
This is a way to amplify the physical display message via geo-fenced online ads to people in a specific location that may have seen our physical ads.

Learning #3 - Costs are not Prohibitive

What we also quickly found out is that costs were not prohibitive. They can range from <$1K (per month) for a panel inside a Muni train to >$100K (per month) for a full station takeover. Obviously, pricing depends on seasonality (fair to assume that an ad during Dreamforce will cost more than let’s say over the summer), but our initial concern that this campaign would be outside our budget was put to rest. Now we had to think what channel to choose and how to execute.

These display ads all have a very fixed supply, but the demand varies greatly. Some months, there are three companies interested in a space. Other times there’s no one at all. Yet other times, a space is split among multiple advertisers. Because we were targeting people who work full-time in the area, it wasn’t particularly important to us what time of year we ran our campaign. Without any specific timing constraints we had the advantage of being opportunistic. We wanted to see if we could come across an opportunity when a high-value channel, like a station takeover, was not taken on time and could be offered to us at a discounted rate. 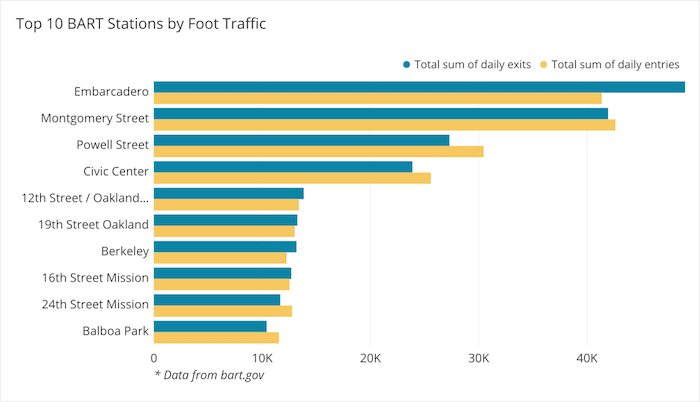 This worked well. A couple of months into exploring this, we were given the chance to secure a takeover of the Montgomery BART station (which is the second most frequented station and right by our office in the Financial District) for the month of September and for a price that was within our allocated budget.

The catch: we only had a week to come up with the concept and design the creatives of the ads in order to make it on time for production. So, after signing the paperwork, we got to work fast. In retrospect, it would have been beneficial to have started on ideation while waiting for the media price to be right, so we could have avoided the extra rushing at the end.

This is important. We didn’t want a metro ad with just a logo and a washed-out tagline like most. We wanted to tell our story as it connected people and data and we wanted to do that in a compelling way. So, our Marketing team had to step up.

Having secured the opportunity, we had a week to come up with the ads but we didn’t have the budget to use an external design agency. Hence we had to do all in-house. Steve, our amazing designer, and Emily, our head of Demand Generation, spent a day brainstorming and came up with three strong concepts that communicated our vision, were relevant to most riders and were true to our brand values.

To narrow down and decide on the final concept, we had to go back to our mission. Our mission at Chartio is to enable anyone in a company (not just the data team) to understand and explore their data. We’re curious people who love helping ourselves and others to get answers to their questions. We’re moving the world past the stage where only Data Scientists and those that know SQL can explore data. So we wanted a campaign concept that:

Since we had 52 panels in the BART station to fill in, we decided to do 10 different ads following the same overall concept with the goal to build different angles of a story. Normally people have a lot more time to spend waiting for trains, so we aimed to not only grab attention, but also get people to want to actually view multiple ads and get the full story. We decided each ad to feature a different person asking a question specific to them and a complementary chart providing a meaningful answer based on actual data. And that’s where the magic happened!

The whole company stepped up and volunteered to help make this campaign a true team effort. We were ideally planning on showcasing some of our customers who use the Montgomery stop. We thought it’d be fun for people working at Optimizely, Prezi, Directly, LendUp, etc. to see their co-workers on ads in the BART during their commute. But, with just a week’s notice we had to move ahead in a more expedited way and decided to ask our own team at Chartio.

Yes, the models in our ads are our employees. Yes, we did the photo shoot ourselves. Yes, those are their real names and roles. Yes, everyone stayed late to look up data sources and come up with the visualizations. And yes, we obviously used Chartio to create the charts. And the result was above and beyond what we had hoped for.

Here are some examples of our “Everyone Has Questions - Get Your Own Answers” metro advertisement campaign.

The Question and Answer series were also combined with a couple of more Chartio-specific explainer ads for those whose curiosity we piqued. 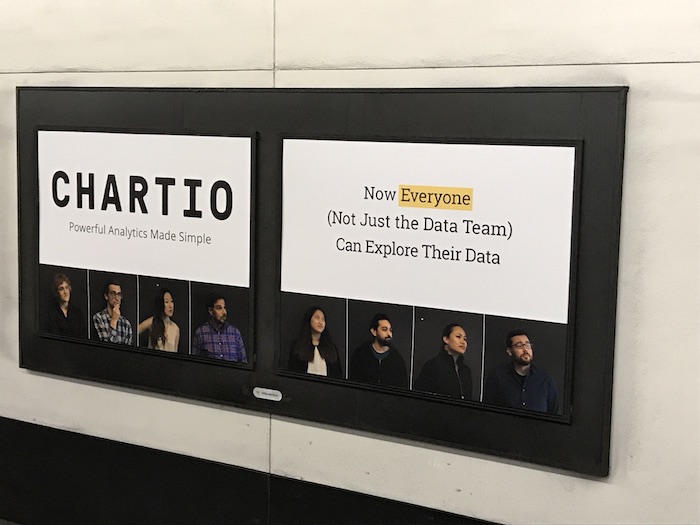 In addition to the physical ads, we decided to run a 30-day geo-fenced mobile ad display campaign targeting riders that may have seen our ads at the Montgomery station. The idea here was to amplify the frequency and effect of our message and used animated gifs for those ads that followed the same concept and design elements.

Learning #7 - Make it fun for Your Team

When you do something like this your team gets excited. It’s fun. Their friends reach out to them and say, “I saw your company’s billboard or BART ad.” In our case many of them said, “I saw YOU on the BART ad!”

On the second day our ads were up, we did a company field trip through the BART. We all wore company SWAG and took the BART to our favorite deep dish pizza restaurant in the Mission. 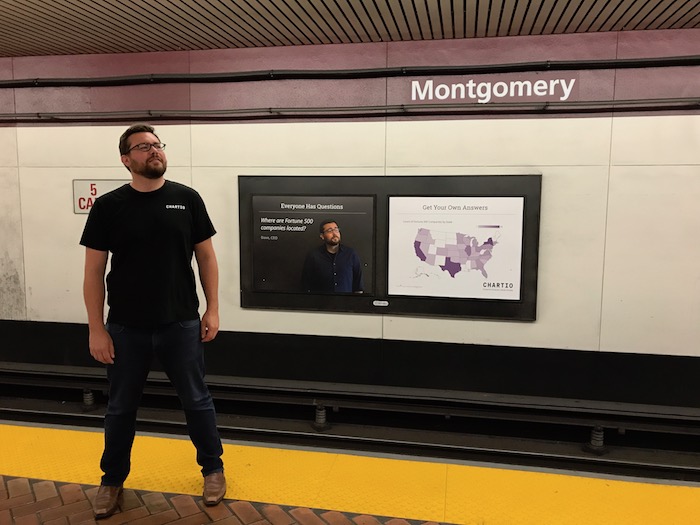 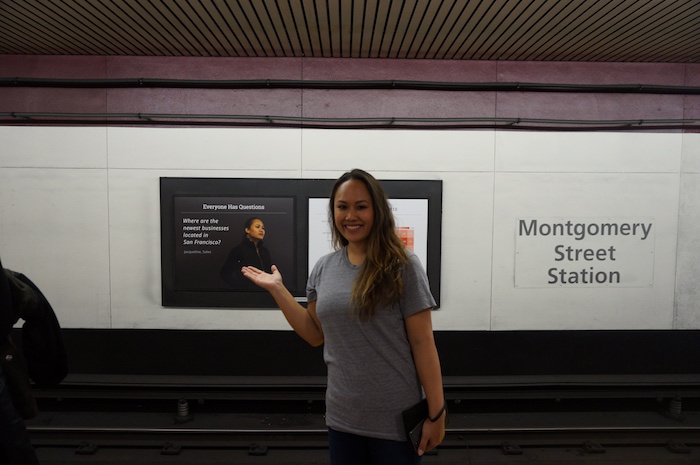 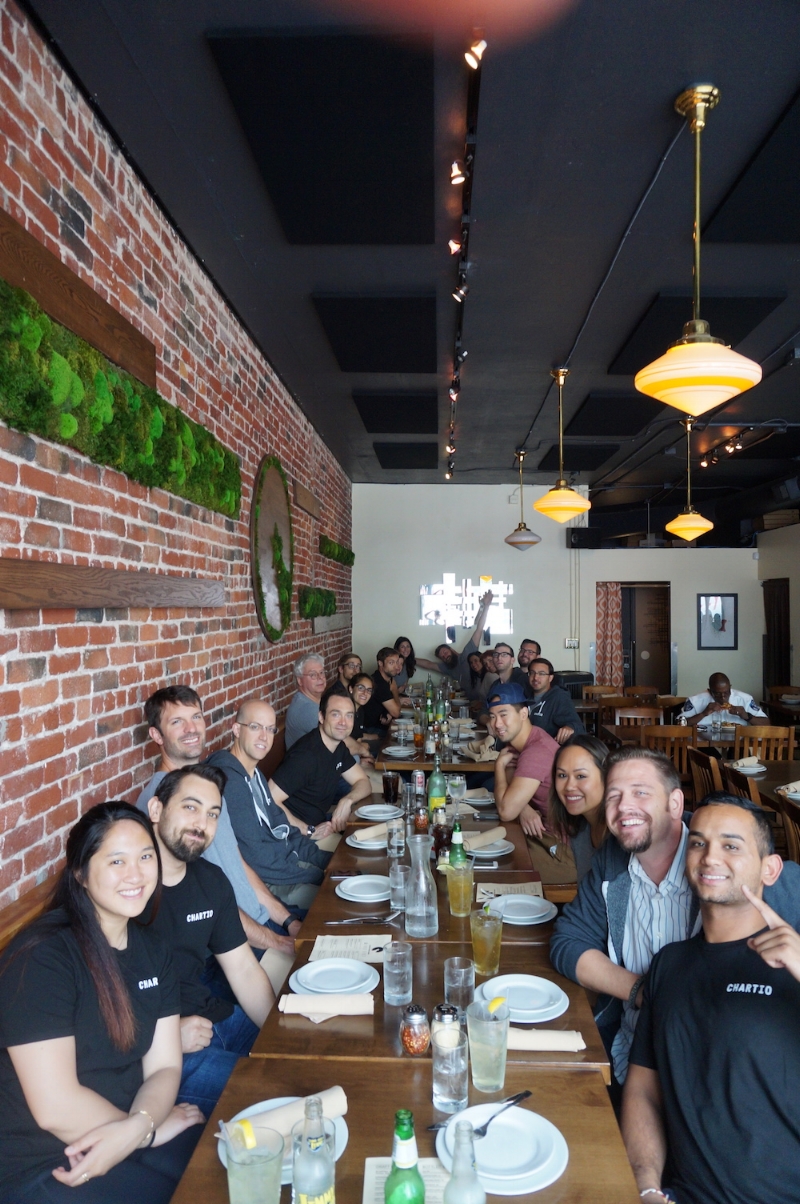 Learning #8 - Measure What You Can

This is always the hard part of display advertising. There was a lot of enthusiasm in the company, but did the ads work?

We received overwhelming feedback from partners and customers in the Bay Area who saw the ads and felt really good about Chartio. Some even asked to be featured themselves in future ads.

We also received unsolicited feedback on Social Media from people commenting on the ads (and, more importantly, on what the ads communicated), which is a great sign. 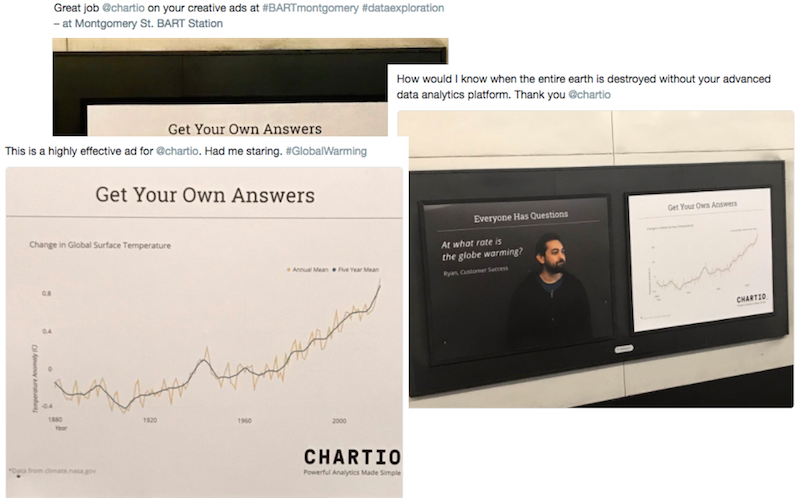 But since we are obsessed with data, we wanted to look at some data to see the effects of the campaign. We built a report in Chartio connecting trial signups to web traffic from San Francisco and there was a clear uptick in September (when the campaign ran) and in October. Though direct causality is hard to pinpoint, there was a good positive momentum with qualified demand in the area during and following the campaign.

Given the positive word-of-mouth on Social Media, we also looked at web traffic trends from social media and again there was a clear uplift in the second half of September as people were commenting, liking, sharing posts about the campaign.

One thing that did not pick up as expected was our integrated mobile ads. Although we saw some steady web traffic coming from these ads, we had an average CTA of 0.4% throughout September which did not indicate any compound cross-channel effect.

So, all in all, a great experience for us at Chartio. Not only did we work as one team for this campaign, but we also delivered a concept and creative that communicated our vision in a very relevant and impactful way for our target audience and did so in a cost conscious way. And although direct causality is tricky to pinpoint, we estimate about 50% of the campaign cost to have already been paid off through increased pipeline driven by the lift in qualified demand in San Francisco during the month we ran the campaign.

We’re now looking forward to the next one!