The winner of this race, Courtney Dauwalter, won in a time of 57 hours, 55 minutes and 13 seconds besting by nearly 10 hours the second place finisher Sean Nakamura. You read that right: a woman named Courtney Dauwalter beat the entire field by so much time that she could have gotten an entire night’s sleep before the second place finisher, a man, crossed the finish line. He was also 21 miles behind her when she finished. 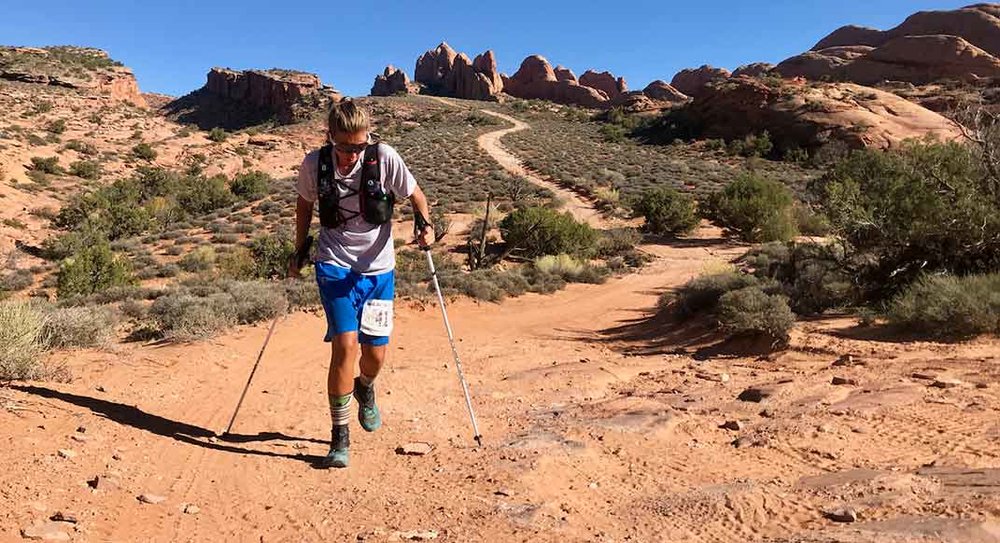 I, myself, am a distance runner. (Full disclosure: I am a mediocre runner on my very best day. I am not anywhere near the caliber of any of the runners that have been or will be named or discussed in this article). Recently I ran the Casper Half Marathon in Casper, WY. That race was a pretty classic out and back course, meaning we left from the start area and ran past the finish area to a point roughly halfway or so (normally) and then turned around and ran back to the finish area. This usually affords me the opportunity to watch the race leaders as they run past me going the other direction back to the finish area before I turn around. Normally, when I see these leaders it is the Half Marathon leaders first (half the distance means the elite can keep up a much faster pace throughout the race) and they are usually pretty elite and very much look like the quintessential distance runner. In Casper however, the first person I saw run back past me in the other direction was a young woman. As a matter of fact the first two people I saw run back towards the finish line were the eventual first and second place finishers, both women.

Taking the average finishing times of the top tier men and women runners from the following races, I created the chart below: 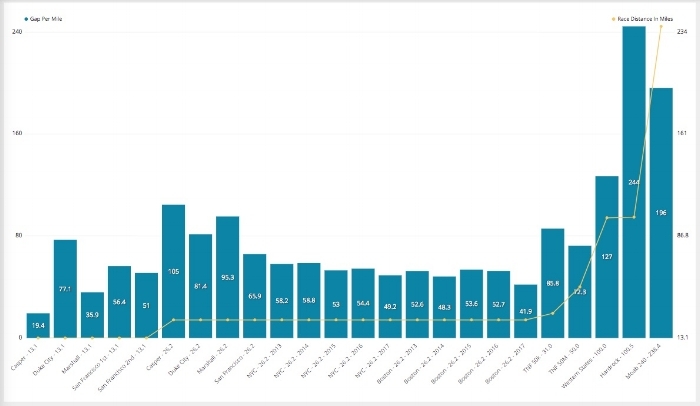 We found, as you can see in the above chart, that the Gap Per Mile between average finishing times of the elite runners in this race (seconds of finishing time over miles in race) goes up as the race distance goes up—except for the largest which is the Moad 240 that Courtney Dauwalter won. That would seem to be an outlier here as we lack data on longer races, so the point at which women become superior on average might still be out there. Will we find it possibly. Rumor has it the organizer of the Moab 240 is considering putting together a 500 mile single stage race, so we shall see.

We did not necessarily find anything trending in the direction of our hypothesis, and that is ok. Why is that ok? It’s ok because data doesn’t always follow hypothesis and the whole point of data analysis is to get to the truth. We can learn a great many things from having a preconceived notion or our hypothesis challenged and greatest among those lessons is learning to trust the data and thus the truth. Data doesn’t lie.

I can hear all of you astute observers out there screaming, “Wait! Tim, do you see a peculiar trend in the middle of your bar line chart?”

The answer is yes, yes I do.

Taking a closer look at the NYC and Boston Marathons you will see a trend that is very interesting. These two races gather the most elite of elite marathon runners in the world on both sides of this gender gap, whereas the smaller races like in Casper, or Albuquerque, or Marshall do not necessarily gain the attention of the world’s elite.

Taking nothing away from the men and women that compete in, finish among the leaders, and win these races. What they do is also amazing but NYC and Boston are in a special pantheon of distance races due to their popularity, large winner prizes, and prestige. They are among the six races considered World Majors along with London, Berlin, Chicago, and Tokyo. Therefore it is a closer comparison to study the gap between men and women, as far as average finishing times are concerned, when they are in the same class of competition as compared to the rest of marathon runners out there.

It looks like the gap between men and women is narrowing. I noticed it too. So, I put together another chart showing the gender gaps in these two races.

And a scatter plot showing the narrowing gaps in both races over time:

Will they cross? If we extrapolate out for a number of years as if the trends stay the same, yes. Simply put, if trends continue as they have since the late 1990s by 2055 a woman will outright win the NYC Marathon and by 2072 a woman will win the Boston Marathon.

To be fair, there are a vast number of variables that go into these data points, for example race strategy. In 2014 the Men’s Boston Marathon race was paced slowly by American Ryan Hall to help his countryman, Meb Keflezighi, to victory.

So there could be some extra inputs to these stories but if trends stay the same from that same time period through the next 60 years, the pace trend could look something like this.

The data doesn’t lie, the gap is closing.