Now that the holidays are over, we thought that it would be a good time to take a closer look at those toys that our children, younger siblings, and other little ones in our lives received during the holidays. 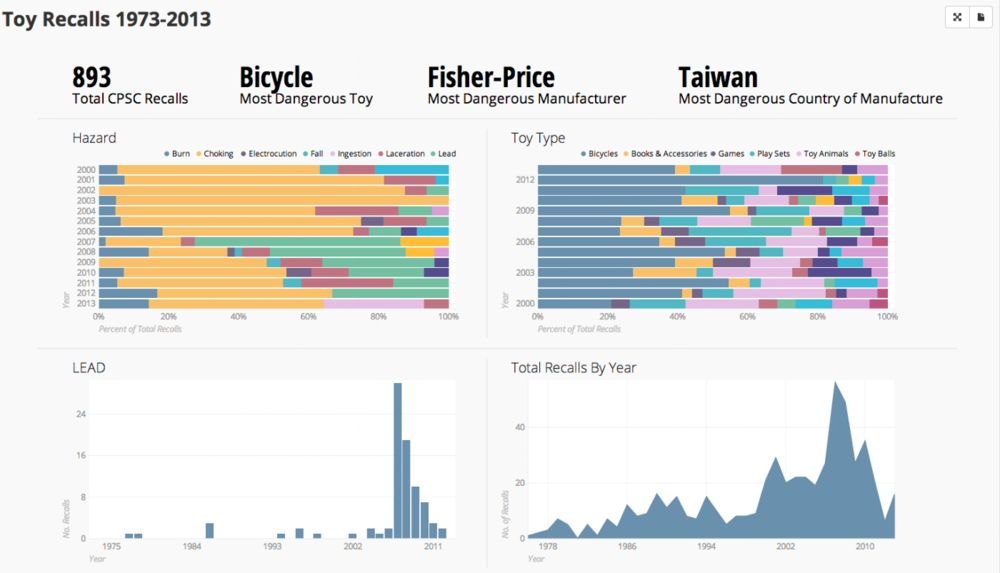 We worked with our friends over at Enigma.io to visualize a Consumer Product Safety Commission (CPSC) database of toy recalls since 1973 in Chartio. It turns out that some of the most beloved toy brands are the biggest offenders.

Would you believe it if we told you that Fisher Price is the most high-risk manufacturer in terms of recalls? Or that the bicycle is the most dangerous toy?

Let’s dig into the data to see what it tells us. 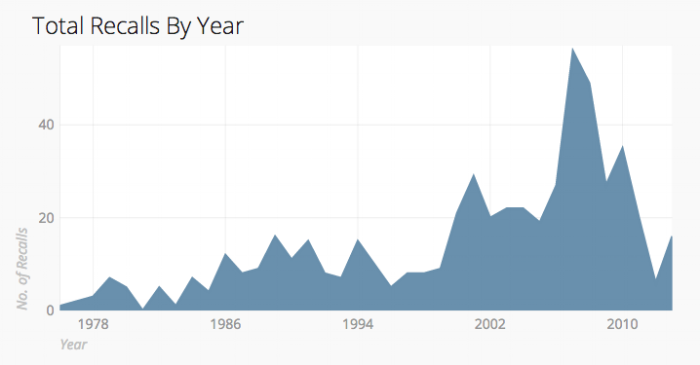 2007 certainly goes down in history as the year of most toy recalls so far. 56 types of toys were recalled that year, which is nearly double the previous peak of 29 recalls in 2001. You may remember the heavy media coverage in 2007 about toy brands coming under fire because their manufacturers in China were using paint containing a toxic level of lead; this is precisely why we see a massive peak of recalls during that time. According to the New York Times, Mattel recalled 967,000 toys in total that year. Although many toy manufacturers purportedly took precautions to double check the conditions of their production chains, further investigation revealed that Chinese manufacturers may have been trying to cut costs by using less expensive paint containing high levels of lead. Mattel was ultimately fined $2.3 million dollars for violating the federal lead paint ban.

Interestingly, the graph above further illustrates how toxic levels of lead in toy paint didn’t pose quite as much of a threat until 2007, and despite heightened awareness and increased regulation, it has taken years for the issue to be contained. 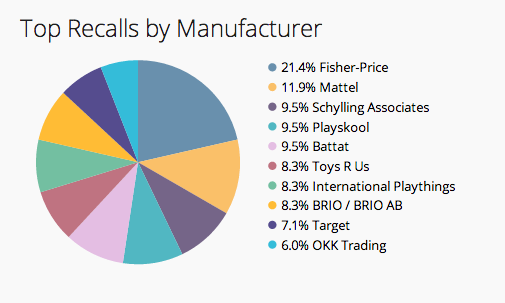 After taking the lead paint debacle of 2007 into consideration, it’s no surprise that Fisher-Price and Mattel (Fisher-Price’s parent company) are at the top of the list for having the most recalls by manufacturer. 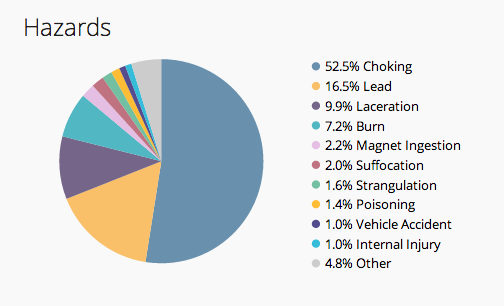 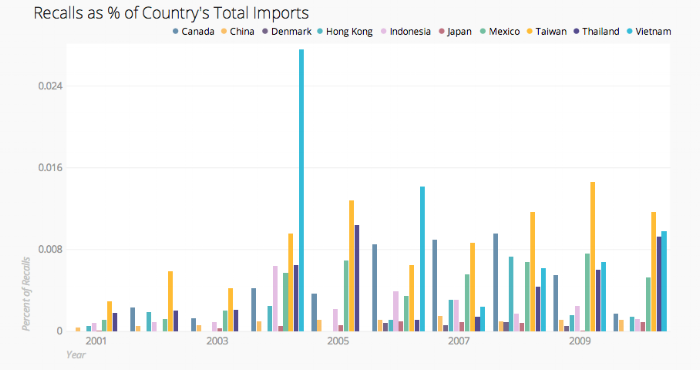 Throughout the years, Taiwan has had the most issues manufacturing toys. It has also had the biggest impact on total U.S. toy imports despite representing a relatively small percentage overall. Vietnam is the only other country that has surpassed Taiwan, in 2004 and 2006. These unexpected peaks are presumably due to a massive recall on Cordless Push Button Toy Telephones made in Vietnam and sold by major school supply distributors from January 2004 through February 2006. Once again, the leading reason for recalls on toys manufactured in both Taiwan and Vietnam is choking. 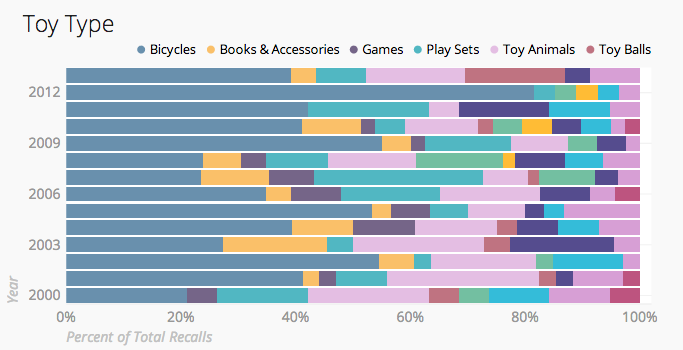 As you can see, bicycles are the most recalled toy, for various reasons. You can find out more about why they are on the top of the list on Chartio’s dashboard. Following bikes is toy animals (28.7%) and toy vehicles (18.1%). 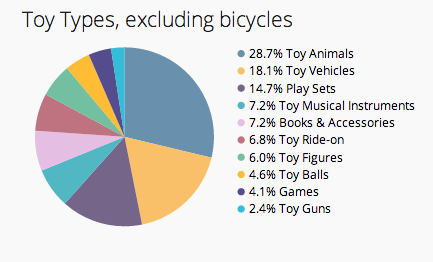 The chart above provides a deeper look at the toy types recalled, minus the bicycles. In 2013 only 16 toys were recalled. Some of the toys in question include the Bearmerzz Stuffed Animals with Flashlight, Toys-R-Us Imaginarium Activity Walker, Toys-R-Us 3-Channel Helicopters, and Build-A-Bear Stuffed Monster.

Toy companies are required to report any hazards to the CSPC as soon as they become aware of them. According to an MSN Living article, “The CPSC then analyzes the company’s findings and considers the proposed remedy (usually a replacement or refund). This process can take from a few days to several months. If the CPSC concurs, the toymaker proceeds with “corrective action” - a voluntary or mandatory recall.”

That being said, it is clear that some toys tend to slip through the cracks. Safekids.org said that in 2010 an estimated 181,500 children were treated in an emergency room for toy-related injuries. In other words, always exercise caution when buying new toys for your young ones!

Destine Ozuygur of Enigma.io and I collaborated on this piece together. Enigma.io is a web service that allows its users to dig into a vast amount of publicly available (but hard-to-obtain) data. We encourage you to check them out.