For most non-profits, fundraising is the most difficult and most important job. There’s never enough money, and they’ve tuned their fundraising machine into a year-round treadmill of annual events. Other non-profit executives and board members never become comfortable with raising money for their operations.

Chartio recently had the opportunity to analyze the data of Watsi, an innovative nonprofit based in San Francisco. And what we learned changed the way we thought about the economics of charity. 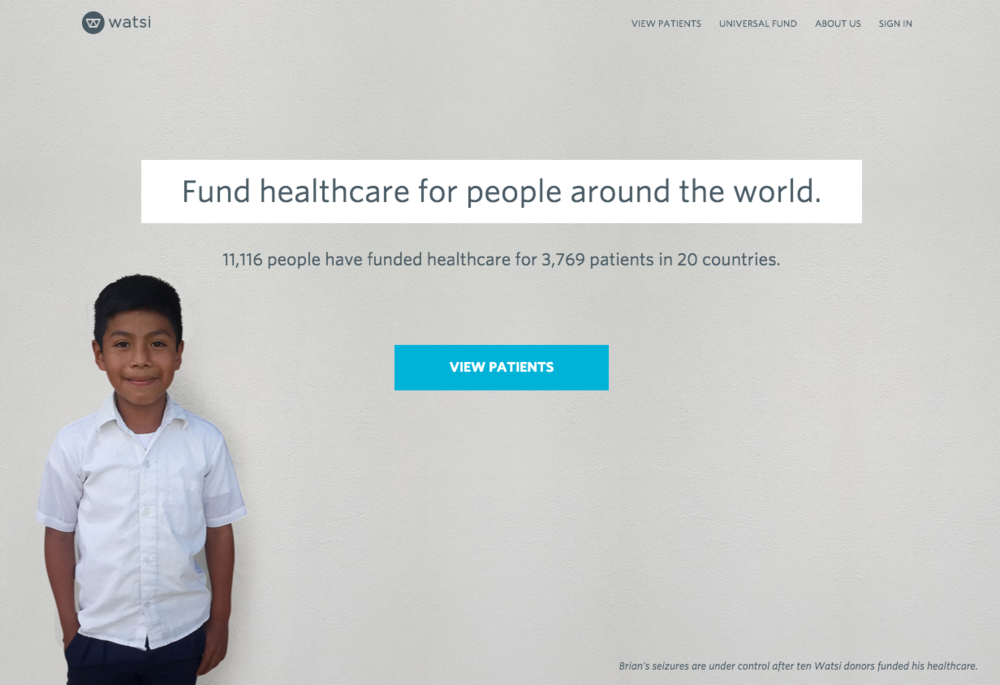 Watsi is a charity that helps donors directly fund medical treatments for specific people in need. It is unlike most charities in a number of ways. It’s web-based. Its initial funding comes from investors. And 100% of every donation goes directly to health care for the patient a donor selects. Watsi’s operating expenses are covered separately by foundations, philanthropists, and donors who leave an optional tip during checkout. As you can see on our map of where their donations are going, Watsi’s footprint is still fairly small, but we think they’re headed for great things. 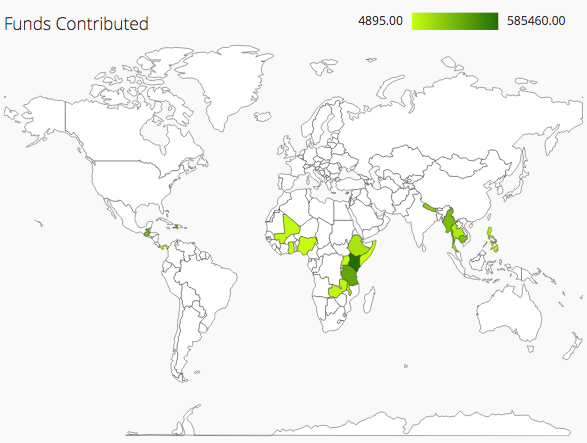 Watsi is also “radically transparent”. They post detailed monthly reports on their website. This radical transparency made our project possible. We were able to analyze Watsi’s data, through a program set up by Segment, which Watsi uses to integrate their data.

Most of Watsi’s Revenue Comes From Individual Donations (So Far)

In the last 12 months, Watsi raised $2.7 million in donations from three sources. Most of their donations so far come from their core business: donations to individual profiles (shown in blue below). Watsi also sells gift cards, which give the recipient the opportunity to choose who receives their donation (shown in red). Gift cards generated 21% of Watsi’s revenue in December, and then dropped off after the holidays. 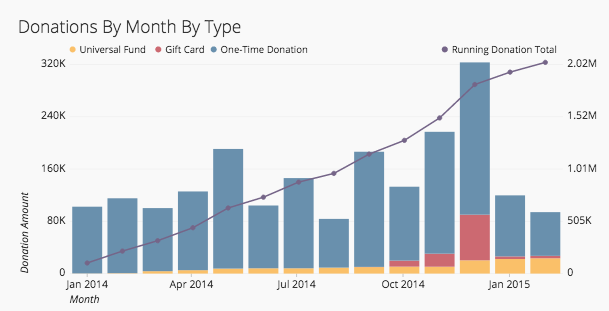 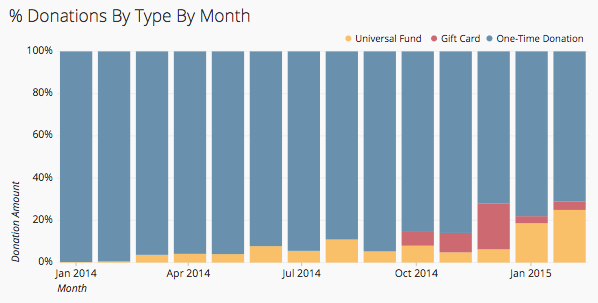 The Universal Fund is benefiting from the economics of subscription sales. As more donors sign up for recurring payments, they build on the payments of previous donors. And since launching last year, Watsi’s subscription revenue has grown by about 20% per month. Watsi’s Monthly Recurring Revenue is now over $25,000, and has been growing by about 20% each month for the last six months. 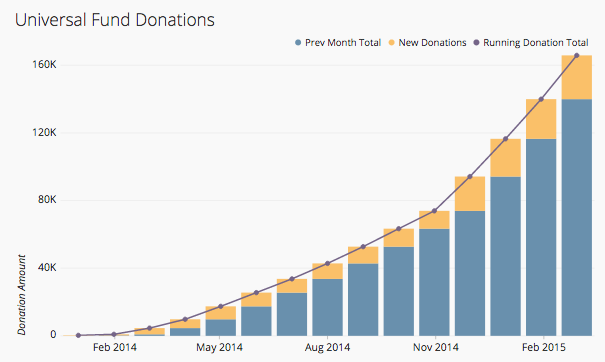 At anywhere near that growth rate, the Universal Fund could be half of Watsi’s donations in less than six more months.

Watsi is benefiting from the economics of subscription revenue. This model is familiar to companies that sell software as a service - companies like ours. That got us excited and we dove deeper into the data.

Churn is the Enemy of Subscription Businesses

Watsi’s subscriber churn rate is 4%. That means 4% of their subscribers unsubscribe each month. So, Watsi’s average Universal Fund subscription length will be about 2 years (1/4% per month = 25 months). With an average donation of about $30/month, the lifetime value of a Universal Fund donor is about $750.

It is also possible to reduce revenue churn by getting more revenue from existing subscribers. But it’s a risky tactic that must be tested carefully, as it could increase subscriber churn.

Another key to subscription economics is building your house list - the email addresses of people who are interested in what you do, which you already have. For Watsi, this means encouraging one-time donors to become recurring donors. Watsi is experimenting with the this, and did a major mailing in January. This resulted in a spike in visits to the Universal Fund landing page. 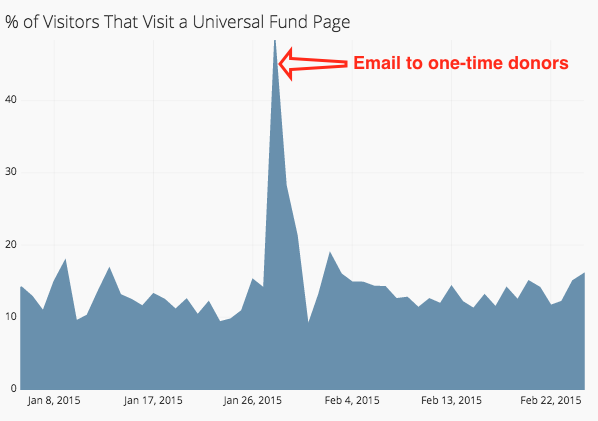 We found that 7% of one-time donors converted to becoming Universal Fund donors in February and that number is still growing, as seen in the next chart. These conversions took place on average one month after the initial donation. Watsi is exploring using a drip email campaign to new donors and gift card recipients within a couple of weeks of their initial donation. 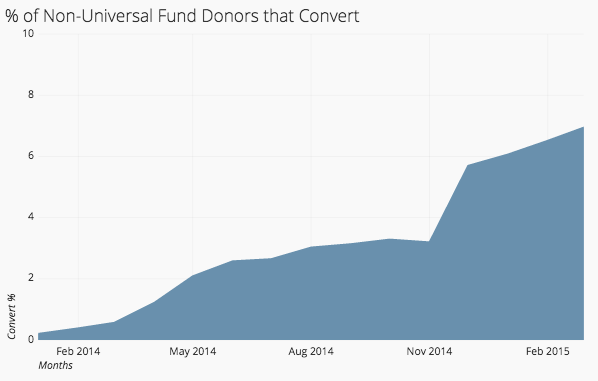 As you can see from the chart above, each day about 12% of visitors to Watsi’s website go to the Universal Fund page.

Nearly everyone else visits and donates to individual profiles, and this hasn’t changed substantially in recent months, except for that spike on January 28, during Watsi’s email campaign. The Universal Fund could definitely be promoted more heavily on Watsi’s website.

Another option is to test soliciting a Universal Fund donation during the one-time donation process.

Help Build the Future of Charity

Watsi is a forward thinking charity with smart developers, smart marketing and operations teams, the assistance of great business partners such as Segment, and a fortuitous location in the heart of San Francisco’s startup community.

Speaking as someone who served on a nonprofit board, and who’s married to a former nonprofit executive director, I know that most charities can barely keep their websites running, let alone create a successful fundraising machine that works as efficiently as Watsi’s.

But the numbers show that if you can get your donors to commit to a small amount of money each month, you can build a much more efficient fundraising machine than you thought possible.

If you’re a nonprofit executive, or on a nonprofit board, you should be looking at how you can implement recurring donations as soon as possible.

If you’re an online marketer, you should be volunteering to help your favorite nonprofit generate recurring donations.

If you don’t fall into either of those categories, I recommend that you make a donation to Watsi’s Universal Fund to thank them for sharing all this data.