Fast Company recently reported on a survey done by the National Venture Capital Association (NVCA) that found of the U.S. venture-backed companies that became publicly traded between 2006 and 2012, 33 percent have at least one immigrant founder. Even household names such as Google’s Sergey Brin, Tesla Motor’s Elon Musk and the Huffington Posts’ Ariana Huffington all emigrated to the United States from various countries.

Immigration reform is on many people’s minds and especially a hot topic in the technology industry as tech executives lobby hard to bring more international talent and make the process to hire international talent easier. Mark Zuckerberg has even weighed in on the topic saying that “immigration reform and visa reform are necessary to boost the U.S. economy and job market.”

With that notion in mind, we wanted to see the visa data visualized so we could come up with our own conclusions. With the help of Enigma.io, who helped us find a public CSV file of 2012 H-1B data stats from the Department of Labor, we uploaded it to Chartio. If you aren’t familiar, an H-1B visa allows US employers to temporarily employ foreign workers in specialty occupations.

It is interesting to note that besides consulting companies, the biggest employers of H-1B visa holders include New York City Department of Education, Oracle, Microsoft and Amazon. In 2012 the majority (92%) of people who applied were awarded their visa. The most applications come from computer systems analysts (89,651 total applications) and 95% receive their visa. On the flip side, there were only 4 visa applications for musicians and singers and only one out of four or 25% received their visa. 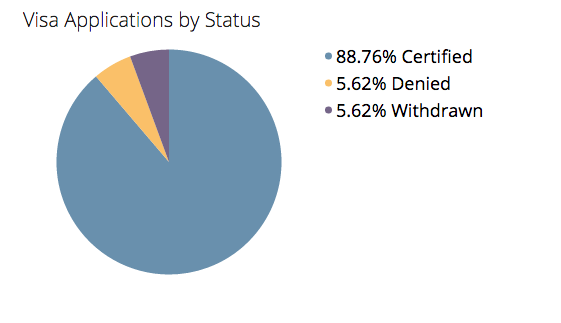 Companies with the Most H1-B Visas

Consulting companies provide the most H-1B Visas. Infosys Limited, Wipro Limited, Cognizant and PriceWaterhouseCoopers take the gold by awarding a combined 67,139 H-1B visas. From there companies to note include the New York City Department of Education (5,219), Oracle (4,499), Microsoft (2,748) and Amazon (2,269).

States with the Most H1-B Visas

Begin visualizing your data in Chartio today. Simple to set up and easy to use, explore the world’s most popular data sources in real-time by working with your database, not a data warehouse. [sign up] (/trial/) for your two week free trial and try it out for yourself!