The internet is disrupting many industries, including the way we bring about policy, governmental and social change. It’s no secret that the internet brings a microphone to causes happening around the world. For example, Ai Weiwei, a world renowned artist based in China, uses Twitter as his way to spread the word about issues happening across the country despite China’s attempts to block him. And as Twitter and Facebook bring conversations about causes alive, Change.org, the biggest social change platform in the world, is bringing large-scale change through technology. (Listen to Ben Rattray, CEO of Change.org, talk about this phenomenon at Activate, an event hosted by the Guardian last month.)

Recently, Change.org, a Chartio customer, celebrated 50 millions users, with more than 274 million signatures on 700,000 petitions. With those numbers, Change.org is one of the best use cases for looking at the demographics making digital activism a reality. With the help of Jonathan Schoonhoven, an analytics engineer at Change.org, we looked into the most popular categories of petitions, which issues are most popular with women vs. men, how age impacts whether you create a petition or sign a petition, and the regions where Change.org is making the biggest difference.

Our biggest finding from the Change.org user data is that male users are 2 times as likely as women to create a petition, whereas women users are roughly 1.5 times more likely than men to sign a petition - but overall, men and women are equally likely to win the petitions they start. When it comes to age, younger and older Change.org users tend to create more petitions, while users in the middle age range (21-44) are the ones signing petitions. You can see these points alongside their prospective charts below.

Let’s start with the big picture.  Overall, the Change.org population is most passionate and creates the most petitions about animals (20%), human rights (15%), and economic justice (11%). 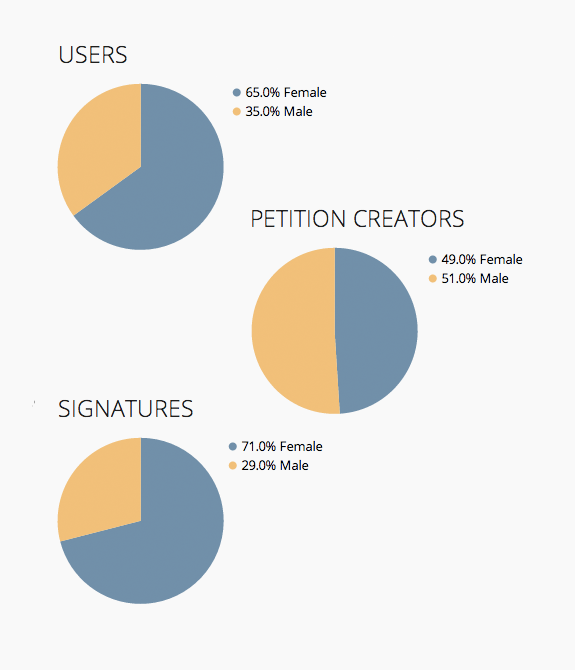 When we look into causes that male and female users are most passionate about, there are definitely causes that each gender leans toward. 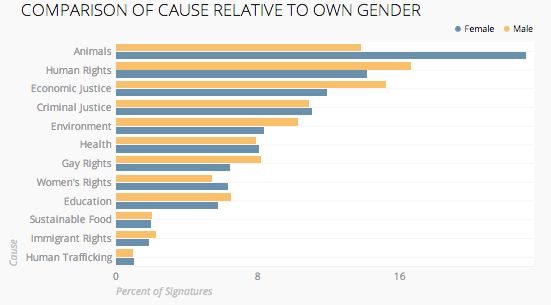 Female users are much more passionate and sign more petitions for animals, whereas male users tend to lean toward human rights and economic justice causes. 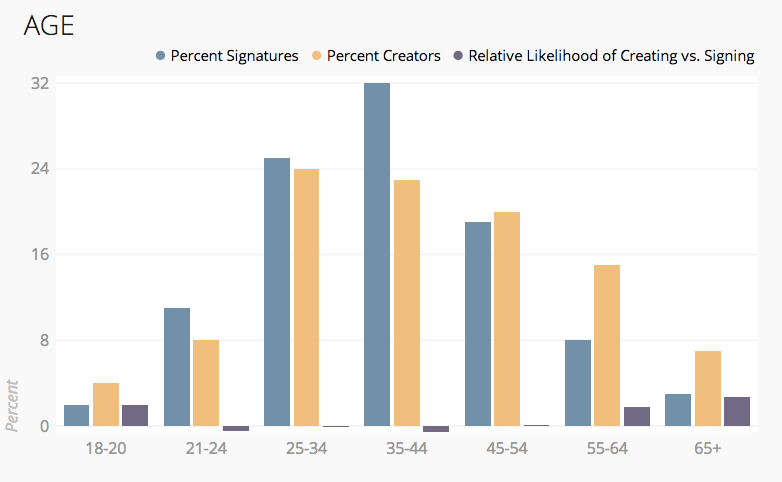 Age is important factor in what people care about.  When you’re 18, you may be passionate about lowering the drinking age, but when you have your own 18 year-old kids, the opposite may be true.  So just what does the data tell us?

And when you look at cause by age range, you see that criminal justice resonates with people no matter the age.

Lastly, when we look at region, it is wonderful to see people from literally all over the globe using Change.org to make an impact. 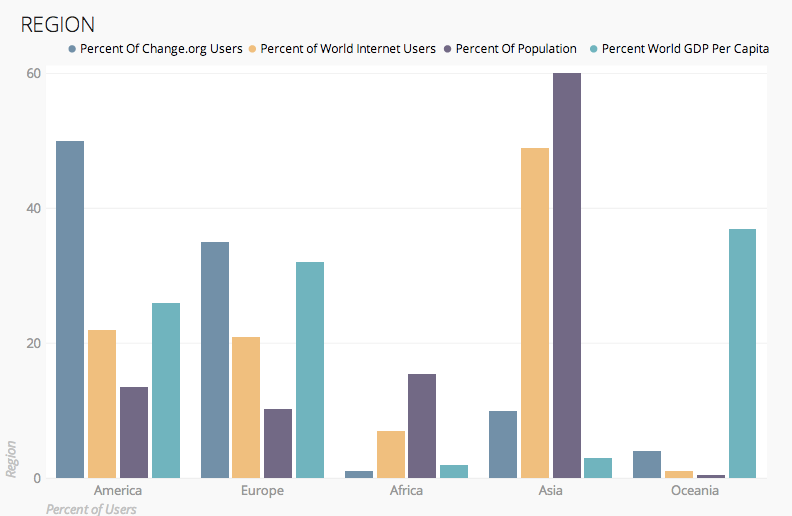 Although created in the United States, only half of Change.org’s users are based in the U.S. Europe is shortly behind at 35%. Even though Asia has the largest percent of the world population and the largest population of Internet users, only 10% of Change.org’s userbase hails from there. As we discussed earlier in this post, some countries, especially in Asia, have not embraced an open internet, suggesting challenges related to governmental structure or authority. Just as Ai Weiwei is being censored, at this time, Change.org is banned in China.

Change.org Europe Petition Council of Europe: Stop Ukraine from Passing a Law That Legalizes Hunting of Cats and Dogs

Whether impacting change towards animal causes, human rights, economic justice, or another topic entirely, be it here at home or around the globe, it’s amazing to see the world become more socially cognizant and globally aware through online activism on Change.org’s platform.

So what should you learn from this data? Here’s our best advice: if you’ve started a petition and are looking for signatures, look toward women and people in the age range of 21-44, as they sign the most petitions. Depending on your cause, targeting them effectively may be your best way to bring about change. 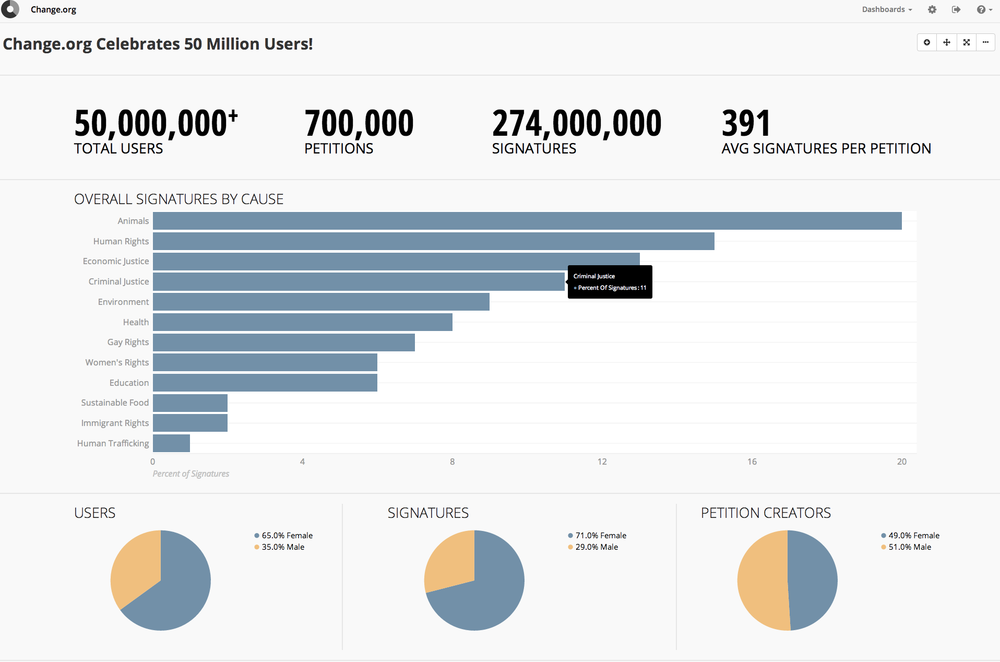