The demand for data and data-driven decision makers is here to stay. According to an IBM report titled The Quant Crunch: How the Demand for Data Science Skills is Disrupting the Job Market projects that, “by 2020 the number of annual job openings for all data savvy professionals in the United States will increase by 364,000 to 2,720,000.”

As data analysis topped the list of the fastest growing desired skillsets in 2016, and coupled with IBM’s report, it’s no wonder that companies are still trying to wrap their heads around organizing their data teams. Organizations are even taking to Quora to pose variations on the same question:

A few weeks ago, we hosted a Chartio User Meetup discussion with Data Analysts from Prezi and Udemy. During the discussion, our panelists shared their best practices, their opinion on centralized versus decentralized data teams and their professional experience in working in the data world.

Which of the following is better: a centralized, decentralized or hybrid data team? The answer is: it depends. While we can’t tell you how to organize your data team, whether each department has their own dedicated analyst or the data team is their own stand-alone group within the organization, it really depends on your company.

We can suggest that you organize your data team in a way that is most conducive to your organization where they’ll have the highest impact on your business and customers.

When Libby Kocha started as a Data Analyst at Udemy, she was brought on as one of three Marketing Analysts for the Marketing department. But once the group of Analysts grew from three to 10, Udemy made the organizational decision to move their Analysts to a centralized data team that supports the larger organization as well.

However, in parallel with the centralized data team, Udemy has kept a few dedicated Analysts for the Marketing and Product teams where domain knowledge is more of a requirement. 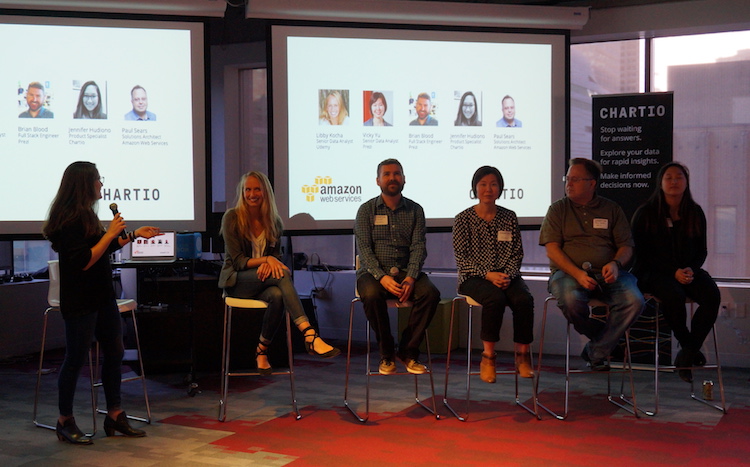 “Historically at Prezi, each group had their own dedicated Analysts. There was a high demand for Analysts, but we didn’t have enough people on the data team to keep up. So, we pulled all our Analysts together and requests would funnel into the group and then we’d prioritize those requests,” said Vicky Yu, Senior Data Analyst at Prezi.

As Prezi continues to grow, Vicky hopes that the Analyst group will revert back to dedicated departments, so they can better support the business.

What is the Difference Between a Data Analyst and Data Scientist?

During the discussion Vicky shared that at Prezi there isn’t much of a difference between to two roles.

“It’s a hybrid role. We’re actually data analysts-slash-scientists. We don’t have a clear split between the two, yet. For our business right now, it’s one in the same and it works,” said Vicky.

For Vicky, this hybrid role is one of the reasons she joined the data team at Prezi.

At the end of the day, whether you’re a Data Analyst or Data Scientist, the two roles do share a fundamental commonality: the need to understand data to be successful in their role.

Parse Out Your Scientists From Your Analysts

While Prezi has a hybrid data analyst-slash-scientist role, Udemy has distinctions between the two roles. Udemy has a data infrastructure team under Engineering, a Data Science team and a separate Analytics team.

The Data Science team works on search algorithms, the recommendation algorithm and other projects that go into production on the site and within the product itself. On the other end, the Data Analyst team is focused on the business and metrics side of the house and supports Udemy internally.

“For example, if our Paid Acquisition team wanted to automate a few of their bids [for ads], the request sometimes comes through to the Analytics team, but it’s more of a Data Science project and so we’ll pass it along to the appropriate team. Meanwhile, we all depend on our data infrastructure team,” said Libby.

Just like building out your product or creating company values, the only person that can organize your Data team is your own organization. Prezi and Udemy are two different companies, but are both shining examples of how different models of organizations operate and function to provide business insights from data.

If you missed our recap on our Chartio User Meetup, click here to get all the insights from Data Analysts at Prezi and Udemy and learn how they drive growth.