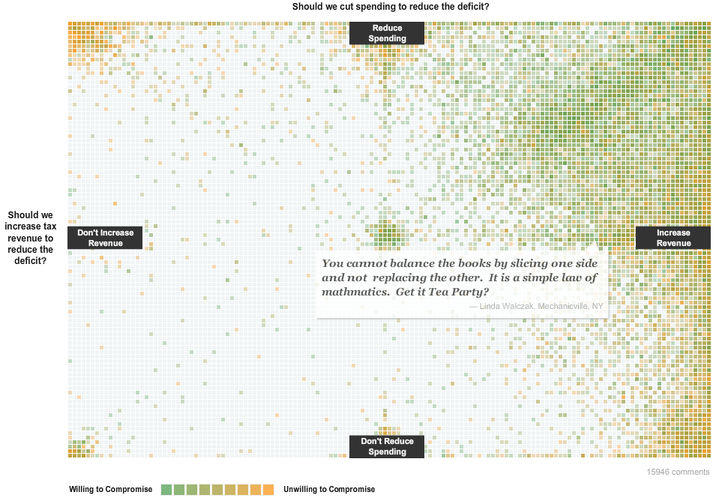 The following post is guest written by Nick Diakopoulos, a data viz whiz who graduated from the School of Interactive Computing at the Georgia Institute of Technology in 2009 with a PhD in Computer Science. His interests currently lie at the intersection of human computer interaction (HCI), information visualization, and automatic content analysis with themes from media including journalism, collaborative authorship and annotation, and games. Check out some of his recent projects.

Visualizations are typically used to serve one of two basic purposes. They either help us explore and understand our own data, or they help communicate the meaning of our data to a broader audience. For the first kind, general visualization techniques usually suffice. On the other hand, if our goal is persuasion, then more specific, detailed techniques such as infographics are better.

We were particularly interested in how the chosen visualization technique can affect how that visualization is interpreted - valuable knowledge for designers hoping to influence and mold their audience’s reaction. (Here we defer the sticky ethical question of whether someone should use these techniques, since in general they can be used for both good and ill.)

The five main classes of rhetoric we found being used were:

Finally, there’s another, more subtle dimension to visualizations which can influence an audience’s interpretation. While most visualizations concentrate on the denotative level of communication, the most effective visualization communicators also make use of the connotative level. For instance, various cultural codes (e.g. what colors signify), or conventions (e.g. the way line graphs suggest you’re looking at temporal data even when you’re not) can suggest alternate or preferred interpretations. In this context, the maxim “know thy audience” certainly rings true.

While a full explanation of visualization taxonomy and connotative communication is beyond this blog post, you can find a more complete discussion in a pre-print of our forthcoming InfoVis paper (here is more information about InfoVis and VisWeek) At the very least though, I’ll leave you with an example which illustrates some of these concepts.

Take for example a recent example from the New York Times (top) where various aspects of the visualization rhetoric framework apply.

Using our rhetorical framework, we can quickly make various observations:

Ultimately visualization rhetoric is a framework that can be useful for designers hoping to maximize the communicative potential of a visualization. Exploratory visualization platforms (like Tableau or Chartio) might benefit from incorporating visualization rhetoric into their services and allowing their users to take full advantage of the additional layers on top of data that help communicate additional meaning. Those particularly interested in this space should consider participating in an upcoming workshop I am co-organizing on “Telling Stories with Data” at InfoVis 2011 in Providence, RI in late October.