What is a Funnel Analysis in Google Analytics?

Generally, a funnel analysis is a method of understanding the steps required to reach an outcome on a website and how many users get through each of those steps. The set of steps is referred to as a “funnel” because the typical shape visualizing the flow of users is similar to a funnel in your kitchen or garage. You can read a lot more about funnel analyses.

In Google Analytics, these outcomes are called goals. You can define many different kinds of goals. For example, a typical web commerce site would use the act of completing a purchase as a goal. You can see more examples of goals. In Google Analytics, any goal can be defined with a funnel of steps that lead up to that goal as long as the goal and the steps are all discrete tracked pageviews (or screenviews on an ap), which are referred to as “destination goals”.

In the example video, we are using the Google demo account which is of the Google online property, that sells Google-branded merchandise. Unfortunately, Google doesn’t provide demo users with admin permissions so you won’t be able to create goals or funnels in this account. But you can follow along to see how the funnels are defined. You can get specific instructions on creating goals here.

The goal in the demo account that is set up with a funnel is “purchase completed”. You can see how it was created by:

How to View a Funnel Analysis in Google Analytics

Once your funnel is set up, it’s very easy to view the funnel visualization in Google Analytics. Simply navigate to the Conversions - Goals - Funnel Visualization report and scroll to the bottom of the report. If you want to follow along in the demo account, select the date time period Dec 1, 2017 - Feb 23, 2018.

How to Read a Google Analytics Funnel Visualization

While creating a funnel visualization is very straight-forward, understanding it is a little more complicated because it’s packed full of information.

From the video in the previous section, let’s focus on the top of the funnel. 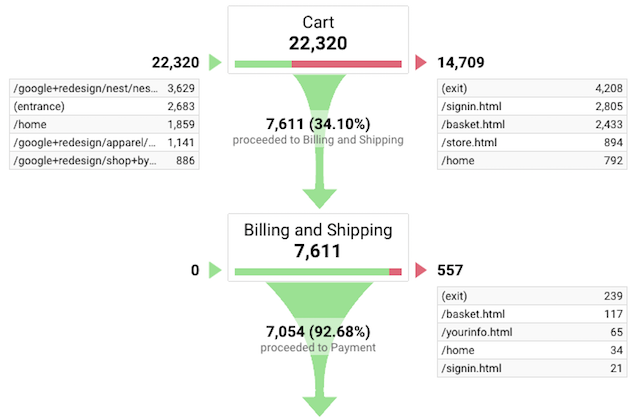 Breaking down down the image:

As you can see, the visualization conveys a lot of information. You can use this information to better understand where in the funnel you’re losing customers (in this case, in the Cart step). You can then investigate why that might be the case. You can use the exit pages as a lead to narrow in your investigation.

Google Analytics provides a very powerful funnel analysis tool to help you understand where your users are dropping off on their path to conversion.