At 50ish years old, SQL is an elder statesman among coding languages, perennially ranking as one of the most popular languages among developers. But SQL’s age brings sharp edges, like awkward syntax and repetitive expressions, among many other quirks.

One technology that’s arisen to smooth these edges out is the visual SQL query builder, which aims to make SQL usable for a broader audience. Visual SQL query builders provide the ability to code SQL using visual elements. This visual way of building queries attracts SQL veterans and newbies alike as a way to both speed up and simplify the process of querying data.

But not all visual SQL builders are made equally. So, we thought we’d give you a rundown of what you should look for in a visual SQL query builder and list a few options to consider.

What to Look for in a Visual SQL Query Builder

For this reason, your visual SQL query builder should not be treated as a replacement for SQL. The visual elements should help you build — or even automatically generate — the query, but the code should always be easy to access and edit.

Some query builders treat SQL as an obstacle to get over, not the fundamental tool it actually is. So, don’t look for a query builder that tries to replace the process of coding with raw SQL. Tools that take this approach often slow down SQL veterans when they want to code and make it harder for SQL newbies to learn how to query effectively.

It Should Have Automation for SQL Veterans

IBM invented SQL in the ’70s, back when bellbottoms were cool (who are we kidding — they’ll always be cool). Switching from more recently created languages back to SQL can give some developers whiplash because SQL’s age makes its syntax a little quirky. For instance, you may need to repeat expressions to construct a query, and if you want to make edits, you’ll likely have to hop around your query out of order.

First, the visual elements of a visual SQL query builder, like drag-and-drop boxes or selecting previews, should automatically generate code when you put them to use. When you select an option or make an edit to the visual elements, the SQL query will update to reflect those changes. SQL veterans can then move much faster because they aren’t bogged down trying to code or change repetitive queries. This automation can shift veterans’ attention from finagling with SQL to actually understanding and exploring their data.

Second, when you need to dive into the code itself, any good query editor will smooth out the process as much as possible with features like:

Features like these are important because, despite its idiosyncrasies, SQL isn’t going anywhere. In fact, a lot of its pain points are proof of its staying power. As Bjarne Stroustrup , creator of the C++ coding language,says, “There are only two kinds of coding languages: the ones people complain about and the ones nobody uses.” Your developers aren’t going to stop coding with SQL, so make sure they have the tools they need to use it efficiently.

It Should Be Easy to Use and Learn for SQL Newbies

As awkward as your developers find SQL, imagine how SQL newbies feel. Helping these newbies is where visual SQL query builders should really shine because their ultimate goal is to make creating queries possible for everyone.

The main way they achieve this goal is by making it possible to create queries without writing a single line of code. The visual elements automatically generate the code under the hood. So, with a good visual SQL query builder, it’s possible for someone with no SQL knowledge to create an entire dashboard on their own using multiple complex queries.

The ideal result of implementing a visual SQL query builder is that everyone is empowered to get the data they need without a developer holding their hand. Scaled across an entire organization, this can democratize data, making data-driven decision-making a daily reality for every employee.

Here are five visual SQL query builders to consider that match the three criteria we just outlined to varying degrees.

Chartio (that’s us! 👋) is a business intelligence (BI) tool with an intuitive way to build queries and explore data. We call it Visual SQL. Our goal is to empower everyone to query, explore, and understand their data, and Visual SQL is our largest step towards that end goal to date.

In the top left, you have the query builder with two options, Visual and SQL. At any point, you can toggle from the visual SQL builder to the SQL code.

To create a query visually, select a column from one of the tables in your database. When you do so, you actually see the data you’re using — in the above video’s case, “MRR,” which stands for monthly recurring revenue, and “Started Paying Date.”

You also have the option to apply filters the same way you built your query. As you do this, the SQL query code is generated automatically, and you can access it at any time.

Below the query builder is the Results Table. This is where you can interact with your findings exactly as you would with a spreadsheet, doing things like changing the date range and limiting rows. As you do so, the Chart box in the upper right corner automatically updates. The result is a SQL query you can generate, analyze, and visualize in under 30 seconds without using a single line of code.

All of this is just one feature in Chartio, which is a fully-fledged mature BI platform. From here, you can create and collaboratewithin dashboards, embed analytics anywhere you need them, and much more.

Query Builder for SQL Server might be a good option for bringing developers who can’t code with SQL up to speed, but non-developers might be left in the dust. In fact, it can be used as a way to translate a SQL expert’s thoughts for people who don’t know SQL. Thomas O. on G2 describes it this way: “Mostly I use the query builder to visualize SQL operations for non-SQL developers and those unfamiliar with relational design theory.”

Active Query Builder (AQB) is a powerful querying tool that can work with many different databases. It’s fairly popular among developers and IT folks. SQL newbies can also use it as well, but, as some reviewers point out, its lack of documentation and bugginess can get in the way. You’ll generally have to know what you’re doing already in order to work around any bugs or the slim documentation.

“With AQB and a little technical knowledge the client can … create custom reports,” says Shrenik D. in their Capterra review. But, they go on to say, “It’s common for there to be small bugs in each new release…Hard to find solutions for the issues.” Overall, AQB a good option if you can stomach some bugs.

FlySpeed SQL Query is a visual query builder focused on speeding up the workflow of SQL veterans. It’s still accessible for SQL newbies but not as much as other tools on this list. 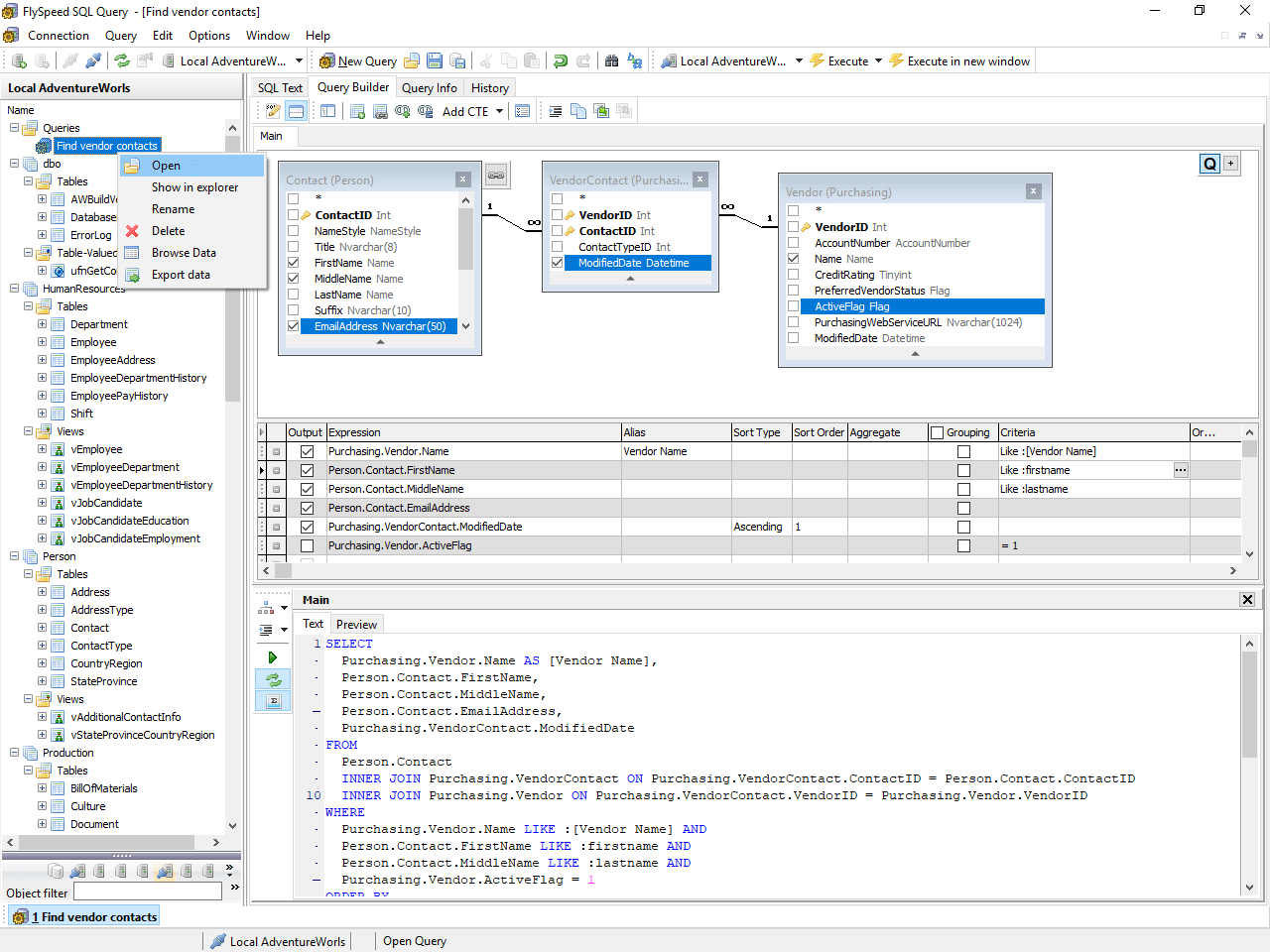 One longtime SQL developer on Reddit gave a fairly in-depth review, stating, “ I can honestly recommend FlySpeed SQL Query as the best query tool hands down for MySql and MariaDb.” If you’re as skillful with SQL as this Redditor, FlySpeed is one query builder to look into.

AquaFold Visual SQL Builder is a query builder that’s focused on simplifying the construction of complex queries. Its focus is on technical users, as stated in its goal: to help “database administrators, developers, and business and data analysts…manage, explore, and visualize data.”

This is another tool that isn’t super accessible to SQL newbies. Consider AquaFold Visual SQL Builder if you have a technically adept team that needs to run frequent complex queries.

If these five don’t quite fit your needs, you have a few more options:

Each of these alternatives has a slightly different focus or scope than what we’ve outlined above as the requirements for a good visual SQL query builder. They’re still worth looking into if you’d like to review all of the options out there before making your choice.

The best way to know if a tool is right for you is to try it out. Every visual SQL query builder we’ve listed has a free trial option (or is completely free), so you can start building queries visually today.

And since you’re here, why not get started with a free Chartio trial?